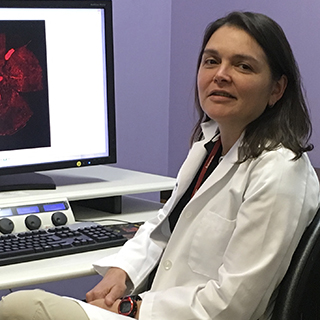 As a graduate student with a split fellowship at Federal University of Rio de Janeiro (Brazil), and Cornell University in New York, I carried out research aimed at understanding the basic aspects of the retinal pigment epithelium (RPE), an all-important layer of tissue next to the retina that helps nourish and maintain its sensory cells. My research unraveled the mechanisms determining the unique distribution of proteins in the RPE apical surface. I analyzed the mechanisms regulating the expression and delivery of both endogenous and exogenous proteins to the RPE plasma membrane. As a project staff member at the Cleveland Clinic, I became interested in RPE aging. As the RPE ages, a number of structural and physiological changes occur. Although these changes are well known, the basic mechanisms determining them are frequently poorly understood. Initially, my research compared the structural changes in diseased and aged RPE cells. I analyzed the protein profile of both young and aged RPE from animal models. As an independent researcher in the Cleveland Clinic I am interested in studying the role of oxidative stress in RPE and retinal degeneration and in aging. Specifically, I am focusing on the regulation of oxidative stress-mediated RPE degeneration by the antioxidant protein DJ-1. Another research focus in the laboratory aims to untangle a detailed analysis of the changes in cell structure, inflammation and oxidative stress markers along the leading edge of postmortem eye tissues obtained from AMD donors with geographic atrophy lesions.

Geographic Atrophy: Changes in the Retinal Pigment Epithelial and Inflammatory Cell Populations in the Region of Expanding Lesions