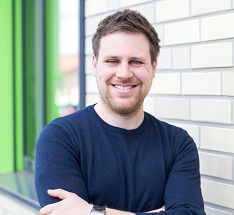 David Berron, PhD, is a postdoctoral researcher at the Clinical Memory Research Unit at Lund University in Sweden. His research is focused on detection of cognitive and brain changes in the earliest stages of Alzheimer’s disease. He uses advanced neuroimaging techniques, such as ultrahigh-field structural and functional magnetic resonance imaging and develops novel cognitive tests to translate findings from cognitive neuroscience of memory to neuropsychological assessment. He completed his studies in psychology at the University of Bremen (Germany) where he focused on clinical neuropsychology, brain imaging and clinical neurology. He then obtained his PhD in cognitive neuroscience from Otto-von-Guericke University and the German Center for Neurodegenerative Diseases in Magdeburg (Germany) under supervision of Professor Emrah Düzel. In 2018, he moved to Lund (Sweden) where he combines ultrahigh-field MRI with molecular imaging and novel memory tests in the Swedish BioFINDER study under the mentorship of Professor Oskar Hansson.